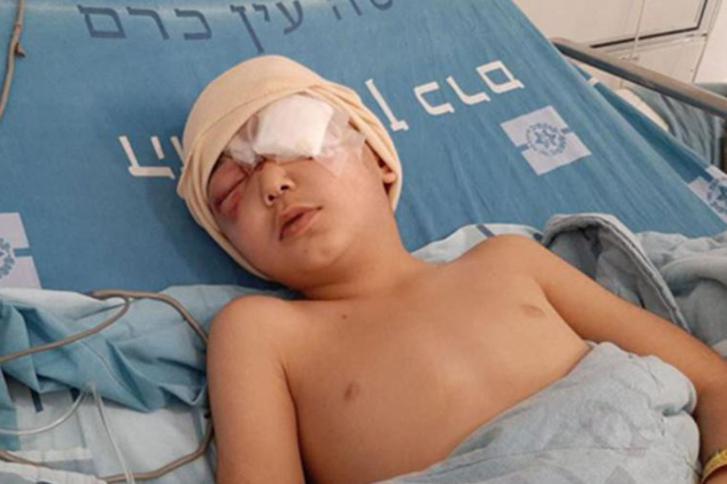 The blood of children

Israel Isn’t Telling Its Soldiers That Shooting Children Is a Crime. It Has To .

Malek Issa (9) suffered serious injuries to his head and face when he was hit by a sponge-tipped steel bullet. There are fears for his sight, and he may also have suffered brain damage. The police said, “During an operation by the police in Isawiyah, riot-control measures were employed during which a minor, aged 9, was wounded. The circumstances are being examined.” The examination of circumstances by the police is familiar to everyone: Nothing will come of it. A police officer shoots a boy, and the matter doesn’t even reach the stage of a real investigation. That’s how it is when the victim is a Palestinian, even if he’s a young child.

At Hadassah Ein Karem, Mohammed Shatawi (14) of Qaddum, is hospitalized in critical condition because soldiers shot him in the head with a sponge-tipped bullet.

Abd el-Rahman Shatawi (10) is in a vegetative state at the rehabilitation hospital in Beit Jala, in the West Bank, after soldiers shot him in the head with a live round.

These children and many others are victims of the light trigger fingers of Israeli soldiers and policemen. When it comes to Palestinians, there’s no difference between children and adults as far as the Israel Defense Forces and the Israel Police are concerned. They’re all potential terrorists. The contempt for Palestinian lives is the same, whether they’re adults or children.

The only way to end this intolerable practice of shooting children – who clearly didn’t endanger the lives of the people who shot them – is to prosecute the responsible parties. As long as police make do with empty media statements about an “inquiry,” while the IDF Spokesperson’s Unit, asked about a child who was shot, merely says it’s “aware of the allegation,” children will continue to be shot without let or hindrance. There’s nobody to make it clear to soldiers and police officers that when they shoot children, they are committing a crime.

Riyad Al-Maliki: “The American Plan is based on the idea that for Israel to have its’ security, the Palestinians must be deprived of their sovereignty”