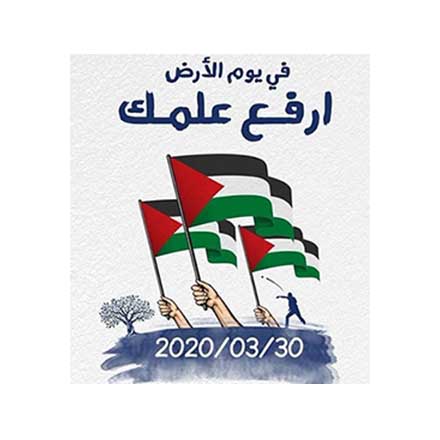 The 44th anniversary of Land Day, annually marked with marches and rallies in Arab towns inside Israel, in the occupied Palestinian territories and among diaspora Palestinians, will be celebrated this year with solemn ceremonies during which the Palestinian flag will be hoisted on rooftops in Palestinian cities as the annual marches have been cancelled due to the coronavirus outbreak.

Land Day marks when Palestinians living in Arab towns inside Israel observed a general strike and demonstrated on March 30, 1976 against the Israeli government takeover of their lands and police killing of six Palestinians on that day and injuring of many others.

“On Land Day and the day of the martyrs we will challenge the conditions caused by coronavirus and raise the flag of Palestine on rooftops and balconies,” said the Palestinian national liberation movement, Fatah, headed by President Mahmoud Abbas.

With gatherings everywhere in the world banned in order to combat the spread of coronavirus, the Palestinians decided that the best way to keep this memory alive is to raise the red, white, green and black Palestinian flag on rooftops and balconies of every Palestinian home.

This call by Fatah was also adopted by other Palestinian groups under the slogan: “I am a Palestinian; asserting the Palestinian identity.”

The main Land Day rallies were annually held in the three Arab Galilee towns of Arraba, Sakhnin and Deir Hanna, where the six Palestinians killed on that day came from.

On that day, March 30, 1976, the Israeli government announced that it will seize 21,000 dunums of Arab land in the upper Galilee in the north of the country to build Jewish settlements. Palestinians in Israel, who make up around 20 percent of the total population, protested this decision with a general strike in all Arab towns.

The Israeli police attempted to break the strike with excessive force leading to serious confrontations with the Palestinian people that led to the murder of the six youths and injury and arrest of many others.