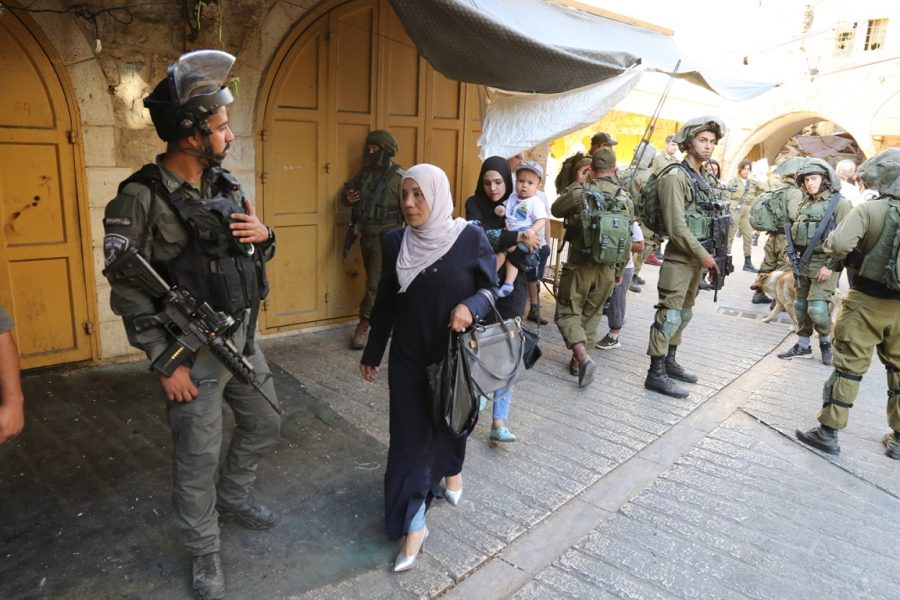 Israeli occupation forces and settlers keep demolishing Palestinian houses, attack locals and detain Palestinains on their own land on a daily basis.

21 June – Israeli forces expand illegal settlements street west of Bethlehem
Israeli forces began today expanding the settler-only street that connects two settlements in the Gush Atzion settlement bloc, built illegally on Palestinian lands in the town of Nahalin to the west of the occupied West Bank district of Bethlehem. The street will be expanded to two-kilometers in length and 10 meters in width, which would separate around 3000 dunums of lands, thus making it impossible for their Palestinian owners to reach.

21 June – Israeli forces order eviction of land near Bethlehem
Israeli authorities notified a Palestinian citizen of evicting his land in al-Khader village, located to the south of the occupied West Bank city of Bethlehem.

21 June – Two brothers forced to demolish own home in Silwan
Two Palestinian brothers from the occupied Jerusalem neighborhood of Silwan embarked on demolishing their own home after being pressured to do so by Israeli municipality of West Jerusalem, in order to avoid paying exorbitant costs if the municipality carries out the demolition.

19 June – Israeli forces injure 10 Palestinians in Kafr Qaddum
At least ten Palestinians were injured by Israeli occupation forces during the weekly protest against Israeli settlements, which takes place every Friday in the village of Kafr Qaddum in the northern West Bank. Israeli soldiers attacked the protesters by live gunfire, rubber-coated rounds and teargas, injuring two by gunfire and eight others by rubber-coated rounds. Others also sustained suffocation from gas inhalation.

19 June – 15-year-old by left with bruises, cuts in settler attack south of Bethlehem
A 15-year-old Palestinian boy was left with bruises and cuts after being attacked by Israeli settlers close in al-Khader town, south of Bethlehem city. The boy was chased and pushed from a high place by a group of Israeli settlers while he was near his house in the Abu Sud neighborhood of the town, close to the Israeli settler-only by-pass Road 60. He sustained bruises and cuts across his body.

18 June – After seeking ‘justice’ from Israel’s High Court, Palestinian given days to demolish own house
A Palestinian man who went to the Israeli High Court to appeal a decision to demolish his house in Jerusalem’s Jabal al-Mukabber neighborhood hoping to get justice from the highest court in Israel, was instead told by the court that he has until Sunday to tear down his house or he will be fined $30,000.

17 June – Palestinian house in Jerusalem, built 10 years ago, under threat of demolition within five days
The Israeli municipality of West Jerusalem today informed Yasin Taha Zaatra, in al-Sawahre neighborhood of occupied East Jerusalem, that his house built 10 years ago and which shelters his family is going to be demolished in five days. Members of the municipality handed Zaatra the demolition order under the pretext the house was built without a permit.

17 June – Israel demolishes structures east Jerusalem
Israeli bulldozers demolished Palestinian structures in the area between Abu Dis and As-Sawahira Ash-Sharqiya town, southeast of Jerusalem. Israeli forces escorted a bulldozer into the area, where they heavy machinery demolished a shack, under construction buildings, besides to several shops, all owned by local residents.

16 June – Israeli warplanes, artillery bomb sites in Gaza
Israeli warplanes and artillery bombed last night several sites in the Gaza Strip. Israeli artillery fired two shells at a site to the northeast of the city of Khan Younis and two others near the destroyed airport in Rafah to the south of the Gaza Strip causing destruction and fire at the sites, but no injuries. Israeli artillery also fired two shells at sites in the central Gaza Strip, also causing damage without any injuries. Additionally, Israeli warplanes bombed a site to the east of the city of Rafah destroying it in total but without causing any human injuries. Israel claimed that the attacks came after a rocket was fired from the Gaza Strip into southern Israel. The rocket fell in an open field without causing any damage or injuries.

16 June – Israeli forces raid Ramallah neighborhoods, archeological site in north of West Bank
A large Israeli army force raided the city of Ramallah, the de facto capital of the Palestinian Authority and seat of its president and government, and an archeological site in the north of the occupied West Bank. The forces raided several neighborhoods in Ramallah while youths pelted them with stones and shot fire crackers at the army vehicles. The soldiers responded by opening gun fire and shooting teargas canisters in their direction.

14 June – Israel detains Palestinian youth during his brother’s trial
A Palestinian young man was detained as he was attending the trial of his brother, who is currently under Israeli detention, at the Israeli military court of Salem, northwest of Jenin in the occupied West Bank. He was taken to an unknown destination.

13 June – Settlers attack village south of Hebron
Illegal Israeli settlers, escorted by an army force, attacked the village of al-Tuwanah, in the area of Masafer Yatta in the occupied West Bank district of Hebron. The settlers stormed the village, attacked several homes and shouted profanities at local residents, who fended off the attack.

12 June – Settlers attack Palestinians’ homes south of Hebron
Illegal Israeli settlers, escorted by an army force, attacked homes of Palestinians after raiding the village of Susya, near the town of Yatta in Hebron governorate, south of the occupied West Bank.

12 June – Israeli tanks destroy water pipe in Jordan Valley
Israeli armored tanks destroyed a 200-meter-long water pipe serving Palestinian communities during a military exercise in the northern Jordan Valley region, northeast of the occupied West Bank. In the meantime, dozens of armored vehicles deployed for the first time at the outskirts of the villages of Tayasir and al-Aqaba, east of Tubas town.

08 June – Greenhouse dismantled, seized in a village near Jerusalem
Israeli forces dismantled and seized a greenhouse belonging to a resident of the village of al-Sawahreh al-Sharqiya, southeast of occupied Jerusalem, under the pretext that it was built without a permit. The greenhouse owner said he never received a demolition order, but that the forces showed up and dismantled it while banning people from being in the area.

08 June – Shacks, tents demolished and seized in south of West Bank
Israeli forces demolished shacks and tents in the village of Birin, in Masafer Yatta to the south of the occupied southern West Bank city of Hebron, and seized them. The demolished structures sheltered 20 children, women and elderly people.

07 June – Israeli forces destroy barracks, street vendors’ stands near Qalandia checkpoint
Israeli forces demolished barracks and Street vendors’ stands in the vicinity of Qalandia military checkpoint and the northern entrance of al-Ram town to the north of occupied Jerusalem. Israeli bulldozers arrived at the area and proceeded to destroy the objects without giving any prior notice.

05 June – Israeli troops detain journalist near Jerusalem
Israeli occupation forces detained a Palestinian journalist at Beit Iksa checkpoint, to the northwest of Jerusalem. Soldiers at the checkpoint assaulted and detained Ahmad Kamal Hababa, a journalist with Palestine TV, before taking him to an unknown destination.

04 June – Settlers cut down 36 olive trees south of Nablus
Israeli settlers sneaked their way into agricultural land cut down around 36 fully grown and years old olive trees in the village of Burin to the south of Nablus, the northern occupied West Bank. Settlers further set fire to the wheat fields in the village, however residents managed to put out the fire and prevented it from spreading.

04 June – Palestinian-owned tin house, built on location of demolished house, destroyed by Israeli forces
Israeli forces demolished a Palestinian residential tin house in the town of Beit Ummar in the south of the occupied West Bank on the pretext it was built without a permit, displacing a family of 10 members.

03 June – Israeli forces tear down Palestinian structures, tents south of Hebron
Israeli  forces  tore down several residential structures and tents in Masafer Yatta in the southern Hebron hills. An Israeli military force escorted a bulldozer to Khirbet al-Mafqara community, where the heavy machinery tore down a tin-and-brick house besides to a tent, purportedly for being built without a permit. Meanwhile, Israeli troops tore down three tin-sheet structures in al-Marekz community besides to a tent in al-Fakhit community. Soldiers also stormed Maghayer al-Abeed community, where they destroyed another tin-sheet structure.

02 June – Israeli settlers destroy property, kick farmers out of their land in West Bank
An armed Israeli settler razed lands in Arab al-Malihat area, northwest of the occupied West Bank city of Jericho, in order to build a wall that separates the dwelling from an illegal Israeli settlement outpost.

02 June – Israeli municipality demolishes six Palestinian structures in East Jerusalem
West Jerusalem’s Israeli municipality demolished six under-construction structures in Jabal al-Mukabber neighborhood of occupied East Jerusalem. Two municipality bulldozers demolished the 250-square-meter structures the owner started to build two months ago under the pretext they were built without a permit. He was not previously informed of a court order allowing the demolition of his buildings but a police officer handed him the court ruling only in the morning just before proceeding with the demolition.

01 June – Israeli forces seize bulldozers, water irrigation system in Jordan Valley
Israeli forces seized bulldozers, a water tank and a water irrigation system in al-Jiftlik village in the occupied Jordan Valley and declared the area a closed military zone. Israeli soldiers set up a checkpoint in al-Jiftlik and prevented people from accessing the nearby city of Jericho, while telling people that al-Jiftlik is a closed military zone until 6:00 P.M. The soldiers broke into and ransacked several homes in the village and detailed five people, including a man and his two sons. Meanwhile, soldiers dismantled and seized an irrigation system that was providing water to over 40 dunums of land planted with grape vines and palm trees, two bulldozers, a tractor and a water tank belonging to Palestinian citizens and families.