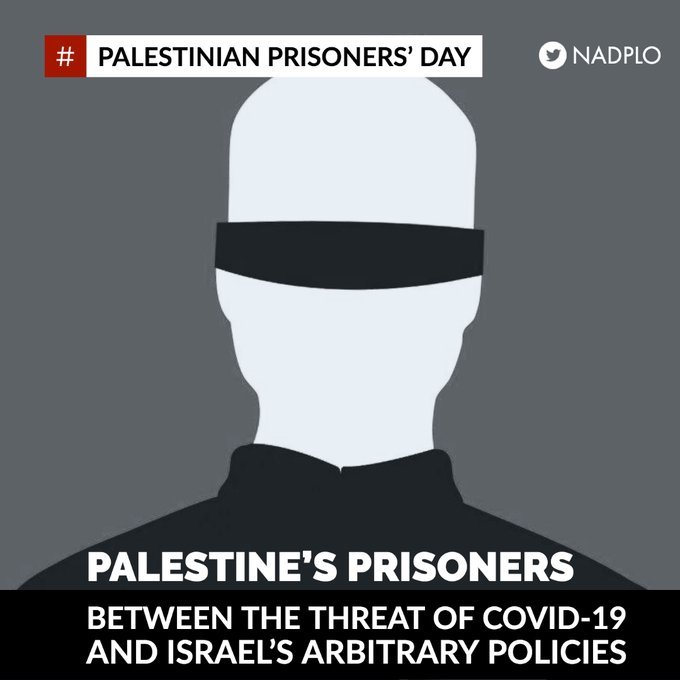 On the 17th of April each year, the Palestinian prisoners, the Palestinian people, and supporters of justice and liberation for Palestine all over the world express their support to Palestinian political prisoners and mark the Day of Solidarity with Palestinian Prisoners in Israeli jails. On this day, and throughout the year, families of prisoners often hold protests and vigils holding photos of their detained family members to keep their stories alive.

>>> Media biref: Palestine’s Prisoners Between the Threat of COVID-19 And Israel’s Arbitrary Policies <<<

Israel has detained 1324 Palestinians since the start of this year, including 210 minors and 31 women.

In addition, 295 Palestinians were placed in administrative detention without charge or trial for periods that can run into several years.

Since the outbreak of the coronavirus disease, Israel detained 357 Palestinians in March, including 48 minors and four women.

In Palestine, political imprisoning is a central feature of the Israeli Apartheid regime with over 20% of Palestinians facing imprisonment in their lifetime. Palestinian Prisoner Day was initiated to remind the world of the thousands of Palestinian political prisoners detained in Israeli prisons or detention centers without charge or trial for extensive periods of time. The number of Palestinian detainees increases as Israeli occupying forces continue to wage campaigns of arbitrary arrests, while Palestinian prisoners in Israeli jails continue to be subject to extensive violations of their rights and dignity.

Since Israeli began its military occupation of the West Bank (including East Jerusalem) and the Gaza Strip in 1967, more than 800,000 Palestinians have been abducted and imprisoned by Israel. This figure represents 20% of the total Palestinian population and 40% of the Palestinian male population. It also includes 10,000 women imprisoned since 1967 and more than 200 Palestinians have died in Israeli prisons as a result of torture and lack of medical care. Furthermore, 8,000 Palestinian children have been arrested since 2000. Each year, some 700 Palestinian children are subjected to Israeli military detention in a system where ill treatment is widespread and institutionalized. For these young detainees, few rights are guaranteed even on paper. After release, the experience of detention continues to shape and mark the former child – prisoners’ path forward.